The Department of English ,through their Club “Literaria” organised their club activity with the theme “Crust-Cultural Theatre” on 11th April, 2022 in the College premises. “Literaria” is a unique platform for expression of the literary and creative skills of students. The students with much enthusiasm participated in onstage dramatics and offstage events like Model and Poster Presentations. The Chief Guests for the day were Mr. Vatsan M. Natarajan, Film and Theatre Actor, and Mr. Sethu Darwin, Theatre Artist. They judged the events and distributed prizes to the winners. The College Magazine “DIRECTION” and the department’s Newsletter “INSIGHT” were released by the dignitaries.

The plays enacted onstage are listed below:

Participants were excited to learn novel literature through drama. Initially they were clueless as it was unfamiliar to them. Over time they got the essence of the literary  works. As it was learnt through performance, they instantly connected to the emotions. The participants expressed much curiosity to work  in such ambiance in future. 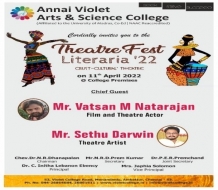