#SEAL-OFF The inauguration of Media Club was launched on 28th October 2020 with the aim of bringing out students' potential on the digital platforms. To implement and highlight this, the club has organised a number of competitions for the students. Name of the competitons go in this manner, Freaky Normalcy, Unmask the Masked and The Game-Changer.The chief guest, Mr. Vigneshkanth, founder of the Youtube channel The Black Sheep, launched and inaugurated the name of the club "The Fourth Estate". He has addressed the students by talking about his journey in Media from his initial days to till date. He has shared many of his personal experiences which have moulded him into a better person in his chosen career.  Addressing on today’s media, he has spoken on the way it operates and the demand for creativity. He has touched on the expansion and consistency of media in the pandemic situation. The program has received many positive feedbacks such as, that it has been an interactive, informative, excellent and a useful and a constructive session. 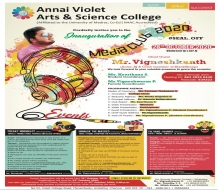