The Department of Economics ,of Annai Violet Arts & Science College, organized its annual  Academic Association-Smith  for the Academic year 2020-2021 on 30.01.2021, at 10. 30 am., through virtual Webinar Programme.

.The Chief guest of the event was none other than our  Head of the Department Mr .V. Anbarasu and he addressed  the student fraternity of Economics department. The programme began with a prayer song rendered by Mr. Sibiraj&  Mr.Anbarasu of I B.A Economics.  Elango of II B.A  Economics  presented the Welcome address  of our chief guest. Mock interview was organized by Mrs. Prasanna Muraleedharan,Asst Preofessor Dept of Economics and the interview was conducted in a smooth manner. There were around five participants namely, Elango, Giridharan, Lokesh, Megha Kumari,and  Subhashree, who  took up the interview.

The chief guest rendered a nice rendition, followed by Sibi raj and compeering was done by Sonia of I B.A Economics.

Announcement of prizes was delivered by the chief guest .There were three prizes,

Rest of the participants to be given consolation prizes.

A very good feedback was given by the students, stating that the event turned out to be an eye opener to them and it has inculcated their spirits to take part in the forth coming events in large numbers.

Students of Economics turned out to be the wonderful audience of the day.

The event  ended with a rendition of National Anthem. 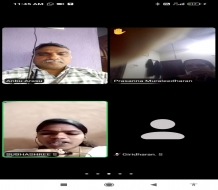