Ms.Priyanka C of III B. Sc Microbiology, Moderator of the session called forth college choir team to begin the program. Followed by the invocation, Principal Dr.Initha Lebanon Ebency has presented the welcome and presidential address to the virtual gathering. She has expressed the pleasure in hosting the program and the institution is being one among the few selected colleges to conduct such creative occasions.Institution’s Innovation Council Impact Lecture Session I has had two experts from the reputed organisations to address students regarding start-ups and incubation centres. The first speaker, Dr. V. Naveen Kumar has been introduced by Dr.Harini, Asst., Professor, Department of Biochemistry. He has begun the session with a small introductory note on his organisation ImmuGenix Bioscience Pvt Ltd. The core part of his lecture has begun with the definition of innovation and the difference between inventions and the scientific inventions. He then has moved on to explaining the types of innovation, also known as the innovation wheel, where he has discussed some of the major factors of innovation such as service, brand, customer engagement, network, product performance, etc., As a continuation to the previous segment, he has emphasized the process of innovation, beginning with empathy, defining the innovation idea, its prototype and finally testing the final product. In this particular fragment, he demonstrated the way in which any innovatory concept has to travel the above mentioned stages for effective result. After a profound elucidation on the importance of bringing quality innovatory proposals, he has spoken on the role and significance of entrepreneurs in any society. He has quoted some of the organisations like OYO which is initiated as small-scale unit and later has transformed into enormous establishments. Further, he has indicated the disciplines such as Molecular biology, Microbiology, Biochemistry, Immunology, Genetics, Chemical engineering and Cell Biology which have towering demands in crops, drugs, vaccines, diagnostics and livestock productions. He has continued to cite few firms like Osteo3d, Smart Scope, Poorti, IMOV Motiontech, Tjay etc., Towards the end; he briefly has narrated the methods to initiate in setting up a Start-Up and its phases. In his closure address, he has highlighted some of the government funding sectors such as BIRAC, Make in India and NITI Aayog which lend hand to the promising entrepreneurs in the field of Molecular biology. Questionnaire session for the first speaker has been hosted by Mrs.Srividhya, Asst, Professor, Department of Commerce. She has brought forward some of the basic queries like, the primary requirement in establishing a start-up and the way to sustain as an entrepreneur after laying the foreground. Also Ms.Menaha of III B. Sc Biochemistry has asked the speaker regarding the procedure to start an incubation centre. The expert has given his perceptions over the asked questions with the needed insights.

The expert talk 2 has begun with the speaker introduction given by Dr.Shyamala, IIC Member and Asst., Professor, Department of Microbiology. The second speaker, Dr. PriyaElamvazhuthihas started the session with the function of startup incubators. She has continued to specify the UN Sustainable Development Goals which help the young aspirants to identify the domains to be focused which are of high demand. She has proceeded to give an extensive report on the funding agencies such as Sitare, EYUVA fellowship, BIG, BIPP, LEAP, ACE, etc., and their fund scale to diverse set of entrepreneurs. She has demonstrated a vast list of BioIncubators ranging across all sorts of firms. In the forthcoming session, she has enlightened the students with the objectives, infrastructure of incubation cell with high-end facilities and equipments of IITM. To educate the students in utilizing the aforementioned amenities, she has provided a detailed presentation on the application process, incubation model and services given to the approaching candidates. Three videos of startup innovations have been played to illuminate students to come up with constructive innovatory projects. She has also mentioned the way IITM BI provides multi-faceted launch platforms where candidates are educated, trained and given funds to lay a firm.Dr. PriyaElamvazhuthi has also provided the programmes which allow the faculty members alongside students in forming a startup. She has continued to mention the IITM’s collaborations with industries such as ETA. As additional information, she even has introduced the team of IITMBI where she is part of it. Before she has concluded, she has given a virtual tour of IITM Research Park’s external and internal infrastructure for the benefit of students. During the discussion part, Mrs. Prasanna, Asst., Professor, Department of Economics, has put forth major questions like, IITM Research Park’s tie-up with nongovernmental organizations for research,and acceptance of common people’s project proposals. The speaker has clarified all the queries with detailed components. 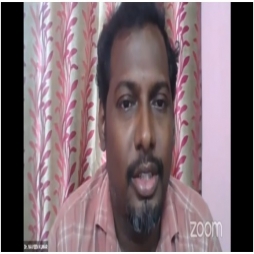 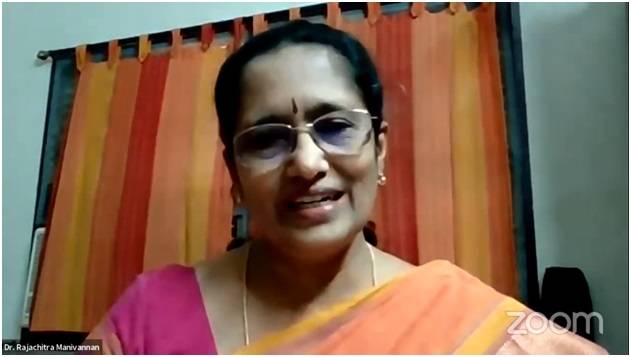 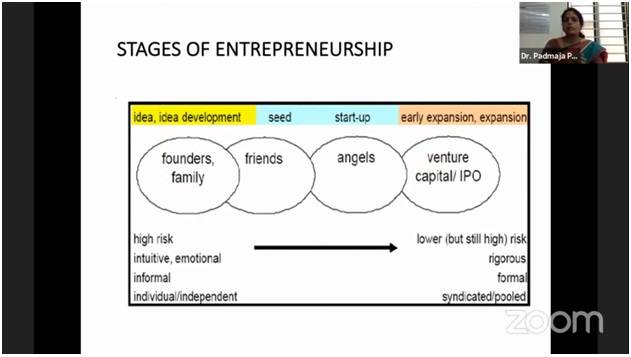 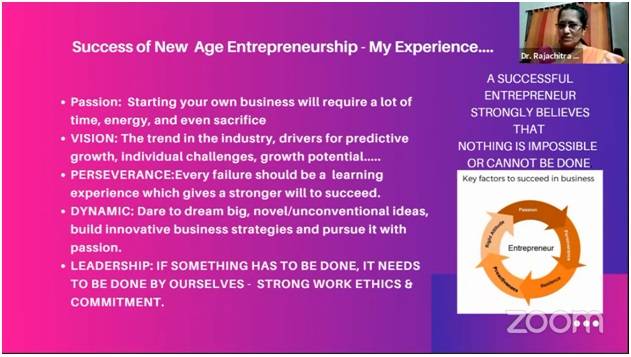